The Lost World of the Berberović Family 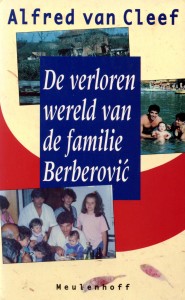 The Lost World of the Berberović Family is a moving and exciting family saga, a document humain based on ‘oral history’, highly readable even without a great deal of knowledge concerning the war in Bosnia.

Through the personal experiences of one family, Van Cleef not only sketches a detailed background of the war, but also the history of communist Yugoslavia under Tito and the culture of the Bosnian Muslims.

It is the story of a war which began as a regional wildfire, but which had gradually spread to encompass the entire Western world. The fate of the Berberović family is a symbol for what can happen in a nationalistic, ethnocentric state.

As a rule, such states practice the selection and isolation of specific parts of the population, resulting in threats and plundering and ultimately in liquidation, concentration camps and deportations. The Berberović family has gone through all of this.

The Lost World of the Berberović Family tells the story of the war in Bosnia at the micro level. The book’s style is extremely down to earth. It is probably for this very reason that the family saga hits the reader as irresistibly and violently as an avalanche.How can these things happen? That is the question which has plagued the survivors of the Second World War all their lives. Between the lines, this same question assumes a central position in Van Cleef’s moving account. He does not provide an answer, he depicts.Anyone wanting to know about the ‘cleansing’ going on in Bosnia must read The Lost World of the Berberović Family. This book, riding the borderline between journalism and literature, should actually be translated into Serbo-Croatian. In its seeming lack of all pretension, it belongs among the best of all that has been written about the war there.
De Volkskrant

A realistic, exciting and tragic story, well-written and told without unnecessary pathos or sentimentality
NRC Handelsblad

Literary experimentation in non-fiction often results in unverifiable, long-winded and dramatized, and therefore – fortunately – outdated New Journalism. Van Cleef has fallen into none of these traps.
De Journalist

With this account, Van Cleef has provided the men behind the barbed wire at Omarska and all those other nameless victims of the civil war in Bosnia with a face. The statistics have become people of flesh and blood.
Leeuwarder Courant

A remarkable book.
The New Yorker