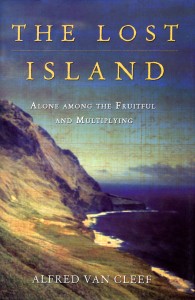 After the death of his father and a divorce from his wife, Alfred Van Cleef — the last descendant of a family of Dutch Jews — learns that he is unable to have children. Seeking the remotest spot on the planet, far from the gleefully reproducing couples of Amsterdam, Van Cleef picks a forbidding island (also called Amsterdam) in the Indian Ocean, one of the world’s most isolated places.

Van Cleef anticipates a total escape from the sexual frenzy of humanity: Amsterdam’s sole inhabitants are a group of thirty-six men. Yet in this stark natural environment, he encounters an actively mating society of albatrosses, rotifers, sea elephants, and fur seals — and most ironically, bdelloid rotifers, an all-female species able to reproduce entirely without the help of males.

With humor and insight, Van Cleef weaves geography, natural history, and biology into a touching story. Sometimes it takes a lost island to find a man.